Home//FAQ//When should a well be moved to plunger lift?

When should a well be moved to plunger lift?

New wells typically flow at a high rate.  The high flow rate carries all the liquid in the well to the surface. As the flow rate declines, liquid collects in the well bore. That liquid creates backpressure on the formation and further restricts the flow of gas to the surface. Because liquid loading initially occurs at the bottom of the well, it’s difficult to observe the onset of liquid loading and to know if or when plunger lift will improve production.

Questions 1-3 (Fig 1) are a function of the well’s basic characteristics, and thus primary in determining the wells response to plunger lift. Questions 4 – 7 are mechanical in nature and may be resolvable prior to plunger lift installation.

In 2007, Marathon presented a study at the Denver Gas Well Deliquification workshop indicating over 90% of US producing onshore gas wells have liquid accumulating in the tubing, thus impeding the flow of natural gas to the surface. Symptoms indicating the presence of well bore liquid include production declining faster than the well’s natural decline curve (Fig 2) and/or erratic production (Fig 3).  Comparing actual flow rate to the Turner critical flow rate (Fig 4) predicts liquid loading before production is impaired. Critical flow is the minimum flow rate required to carry liquid to the surface.

Sufficient gas volume is estimated using the rule of thumb “400 standard cubic feet per barrel of liquid per 1,000 feet of lift”. Wells with less gas volume are typically not effective candidates for plunger lift. As an example, an 8,000 feet deep well (bottom hole spring to wellhead) producing 40 bbls/day of liquid require at least 128 mcf/day of gas volume (400 scf X 40 bbls X 8000 / 1000) to lift the liquid to the surface. A well capable of producing greater than 128 mcf/d has sufficient gas volume for a plunger to surface the liquid column. Observing the actual flow rate when the well is liquid loaded may lead to erroneous assumptions, as plunger lift may be able to prevent liquid from resettling in the well after it’s been unloaded.

Sufficient gas pressure to operate a plunger lift system is best evaluated using the Foss and Gaul equation, yet can be approximated by the rule of thumb requiring the available well pressure to be at least two times the pressure generated by the tubing liquid column. Lift pressure is the numerical difference in casing and line pressure, while liquid load is the numerical difference in casing and tubing pressure. When lift pressure is capable of building in a reasonable period to at least two times the liquid load, the well has sufficient pressure to surface the plunger and liquid column.

Gas wells meeting the three above conditions are generally good candidates for plunger lift. However, operators must carefully consider questions 4 through 7 for optimal well performance.

Once a well is qualified as a plunger lift candidate, the question remains when to install the system. Often, industry practice results in waiting until production declines, then addressing the problem. It is natural for operators to seek financial justification prior to installing a plunger lift system. However, the cost to return production to the natural decline curve is much greater than prevention!

Ultimately, the goal should be to maintain production along the well’s initial natural decline curve. Using a production graph to generate a decline curve will predict when production will approach the critical flow rate region. Note that the actual critical flow rate may be greater than that predicted by Turner (Ref SPE 94081 “A Systematic Approach to Predicting Liquid Loading in Gas Wells and SPE 120625 “Guidelines for Proper Application of Critical Velocity Calculations”).

Prior to production entering the critical flow rate region is the proper time to install a plunger lift system on qualified wells. 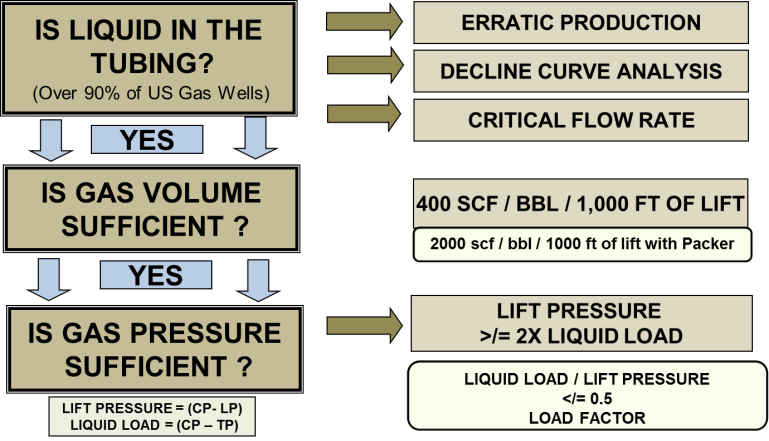 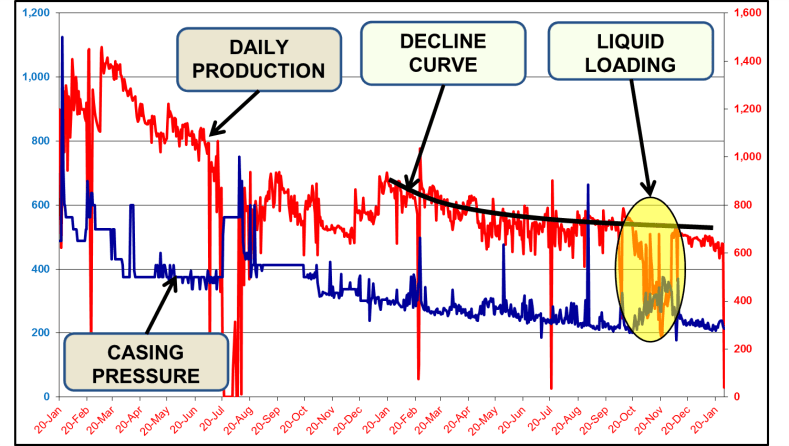 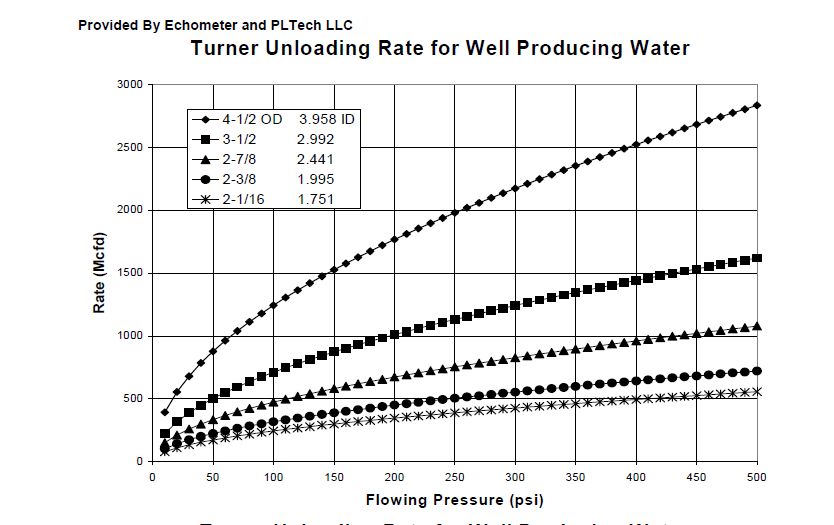 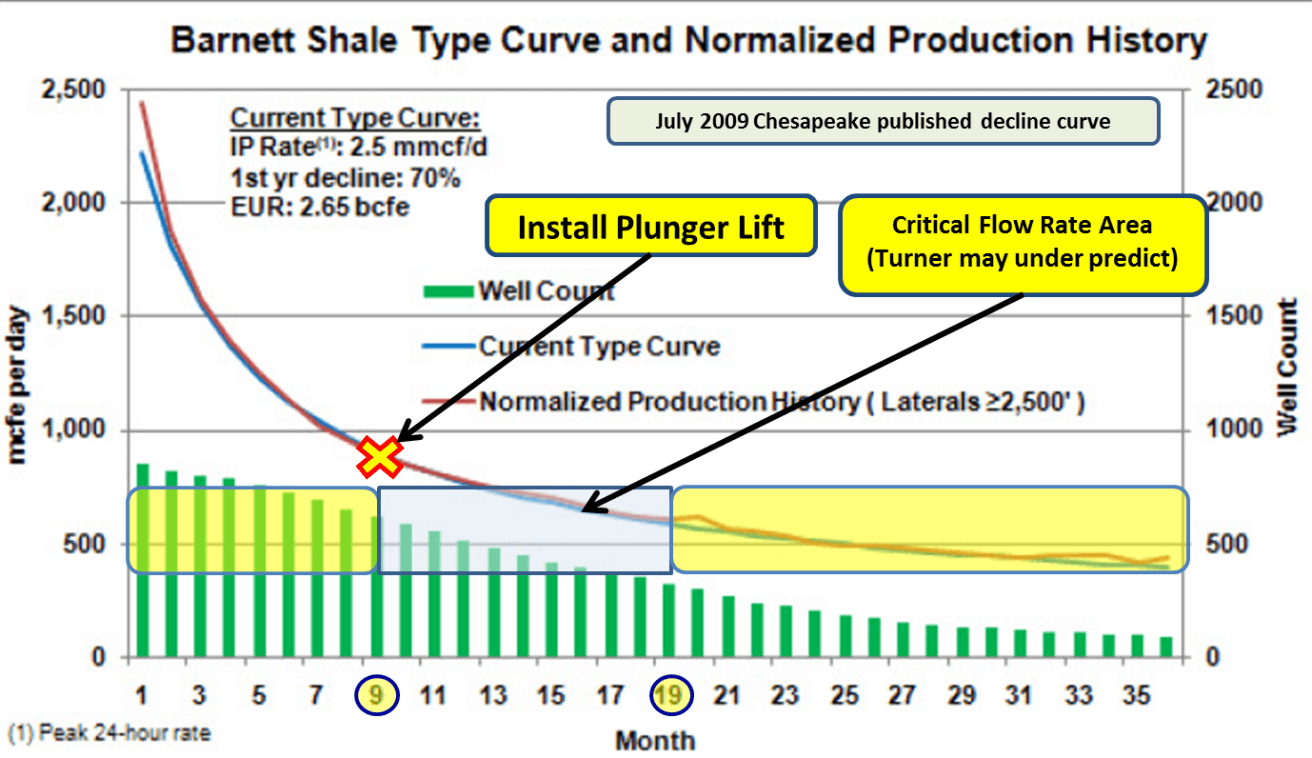 Fig 5. When to install plunger lift